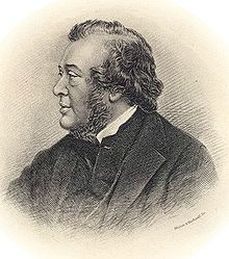 Macleod was born in Campbeltown on 3 June 1812, a son of the manse. His father, later minister of St Columba's in Glasgow, founded a scheme to provide schools in remote parts of the Highlands.

Macleod moved to Glasgow in 1825 and from 1827 studied at the university there. From 1831 he read theology in Edinburgh and from 1833-36 worked as a tutor to the son of the High Sheriff of Yorkshire. He was ordained at Loudoun in 1838 and in 1843 moved to Dalkeith before becoming, in 1851, minister of the Barony parish in Glasgow. Like his father, he was interested in education, establishing day schools for more than 2,000 pupils.

In 1869 he became Moderator of the General Assembly, and also made church-related visits to Canada and India. This latter journey, in 1867, undermined his health, and he died on 16 June 1872.
Source:  Glasgow Digital Library

Johanna Spyri (1827 - 1901), was a prolific writer, but is today chiefly remembered as the creator of Heidi.
She was born Johanna Heusser, the daughter of the village doctor in Hirzel, just south of Zurich and was educated first at the village school and then in Zurich, after which she spent two years, 1844-5.

In 1852 she married an ambitious young lawyer, Johann Bernhard Spyri, and moved to Zurich. Her husband took a more and more active role in Zurich politics, eventually becoming the city recorder.

Her first story "A Leaf on Vrony's Grave" appeared anonymously in 1871, when she was already 43.
Encouraged by its success, she followed it up with several more tales, but it was only in 1878 that her first book for children appeared. The first Heidi novel - "Heidi's Apprenticeship Years" - came out in 1880. It was only in response to popular demand that she wrote the follow-up - "Heidi Uses what She Has Learned" - which was published the following year. The two together make up the novel now known simply as "Heidi."
Source: swissworld.org 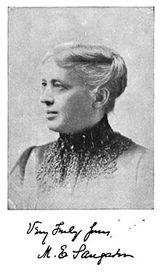 Margaret E. Sangster was an author and editor whose life spanned the mid-nineteenth to the early twentieth centuries. Though she published both articles and books, she is best known for her editorial work. While she has been connected editorially with five different publications, she is probably most noted for her work as editor of Harper's Bazaar.

Born Margaret Munson on February 22, 1838 in New Rochelle, New York, she was born into a deeply religious family. While she didn't have many educational advantages, so far as school life was concerned, Margaret had a well-rounded education provided at home. She undoubtedly had an inborn talent for writing and literary work, yet she was also careful to cultivate her talent as she matured. When she was still quite young, Margaret became a contributor to the leading periodicals of her day, and her first work, "Little Janney", was published in 1855 when she was only seventeen years old. This story won her a commission to write 100 juvenile stories to accompany a series of drawings.

In 1858 Margaret married George Sangster and gave up her writing career until after his death in 1871. After her husband's death, Margaret once again turned to writing and contributed several pieces to the "Hearth and Home". She soon became editor of that magazine's children's page and then was assistant editor of the magazine, a post she held until 1875. While she edited "Hearth and Home" Margaret still contributed articles to other magazines, especially essays and letters written for young girls on the Christian life. Margaret felt a call to be a role model to girls as a Christian leader. In 1875 she went on to become editor of "Christian at Work" and stayed with this position for six years. After this she spent the next nine years as assistant editor of the "Christian Intelligencer". For part of this time she also editor of "Harper's Young People", which was a new periodical. In 1889, Margaret took on the job as editor of "Harper's Bazaar", where she remained until the magazine failed in 1899. Mrs. Sangster found time for a sizable amount of miscellaneous work, and for many years was ranked as one of the most popular American poets. She published a Manual of Missions of the Reformed Church in America, Home Fairies and Heart Fairies, and a series of Sunday School books. She also published numerous other books including, "An Autobiography: From My Youth Up; Personal Reminiscences" that was published in 1909.

Margaret Sangster was a deeply religious woman and a prominent member of the Dutch Reformed Church and devoted much of her time to her denomination. She was especially fond of children and wrote many juvenile books. In fact, two of her productions, Elizabeth, Age Nine and Are the Children at Home were household words and were in many of the school readers. She wrote about a half dozen popular other books for children. Margaret Sangster was a devout, cheerful, and sentimental woman, yet she was also very practical and had much common sense. She had many friends and many adoring fans. She died on June 2, 1912 in South Orange, New Jersey.
source: historyswomen.com

Frances Ridley Havergal (1836–1879) was born in  Worcestershire, England. Her father, Rev. W. H. Havergal, was a vicar and a hymn writer. The name Ridley came from her Godfather: W. H. Ridley, Rector of Hambleden, who descended from Bishop Ridley, the martyr. She was nicknamed "Little Quicksilver," because she was bright quick and clever. She possessed gifted intelligence and was reading at age three. She memorized many books of the Bible. Her mother Jane, died when she was 11 years old. She went to boarding school in Belmont. She had a disease called erysipelas (a painful red infection on skin and/or face) in 1851. Went to school in Germany, at Louisenchule, when 16 years old until 1853. She was very active in the Y.W.C.A. and conducted weekly meetings. She travelled to Switzerland several times with different people. Intelligent and educated, her life was characterized by a deep earnest consecration to Jesus. She wrote many devotional books and hundreds of hymns and poems. Favorite hymns of hers are "Who is on the Lord's Side," "Lord Speak to me," "Truehearted Wholehearted," "Like a River Glorious," and "Take My Life and Let It Be."